Create, Take, Take Over and Be Free!

Propaganda of the Plead?

(ed. Originally published on March 14, 2012 – here! Background: On March 5, 2012, several thousand “occupy” protesters and their allies descended on the Capitol in Sacramento to “demand” nothing more than their human right to education. Or so many of them thought. The following is an account of the events of that day, submitted recently by an OLAASM comrade who was there. We offer this brief introduction only to give context to our comrades’ insights and lamentations.)

Never doubt that a group of thoughtless, committed reformists can completely smother a radical moment.

It is a special occasion when approximately 500 people invade a State capitol, ready and willing to take direct action and risk arrest to Occupy it for the night. it is an even more awesome spectacle when the enthusiasm and the opportunity to do something politically relevant is robbed from those 500 people by a crew of dipshits like the ones who assumed control of the action once people were inside, and steer them into a dead-end “process” that subverts the goals that brought them together in the first place.

After driving all night from Southern California in a van filled with comrades, we were excited to arrive in Sacramento and participate in a highly anticipated direct action – an attempt at an overnight occupation of the Capitol.

As we “take” the Rotunda in the entrance of the Capitol building, rather than chant in victory, the facilitators quickly mobilize themselves and began an enthusiastic chant of “please…sit…down.” Please sit down?! Why should we sit down? So that our fearless facilitators can tell us what the General Assembly is going to do. However, the moment the Assembly is announced, the sheriffs move into position and block off all four entrances into the Rotunda. When questioned why, the sheriffs, predictably, do not respond. When a comrade tries to walk through, he is pushed back. This is supposed to be the day when we, students and citizens, reclaim the Capitol; instead almost immediately it becomes clear that we are not here to take back public space, we are not here to Occupy, rather, we are here for another performance of planned, civil disobedience.

It did not take long to realize that the General Assembly had been co-opted by liberal reformist, patriarchal white men and women, who spread fear mongering, misinformed predictions for how the day would unfold (you WILL get arrested!!!), turning the General Assembly into a ridiculous, tedious discussion about ‘demands.’ When we spoke up to ask why we weren’t discussing whether we should even be making demands, whether that is really what we should be spending our time on when we were surrounded by the police state, we were not listened to; we were looked at with blank or suspicious stares.

A large chunk of time, at least an hour, was devoted merely to the number of demands that we should make. 1-5, 5-10, 10-15? The option of zero demands was conspicuously missing. Zero demands, not explained, not de-constructed, finally presented as an option, gains only a fraction of the votes. What did it matter anyway? the vote was at its best symbolic; but more realistically, it was useless.

After determining the number of demands, they thank us for our patience because we are wearing thin. our bladders are full. As commands from our facilitators to “BE QUIET” echo against the walls of the rotunda, frustration settles in. Thousands of eager activists did not travel hours to the heart of the state government apparatus to be harassed by one relentless question: “What are our demands?”

The demands sprawled from ‘pass Prop ‘x’ and ‘free education’ to ‘end capitalism.’ Yet the only demand (chant) that made any sense was, “CHP…Let us pee!” Coincidentally, that was the only demand that was conceded, passed only with incongruous help from Lt. Governor Gavin Newsom with his slicked back hair and photo-ready smile. After awhile, much to the chagrin of the facilitators, no paid attention except for the people speaking themselves.

An artist’s rendering of Gavin Newsom

At 4:20 PM, we are mic-checked in order to hear a new proposal:a moment of silence followed by an ‘om.’Absurdly, this was the second most effective proposal of the day. We had spent three to four hours in the rotunda of the Capitol building, surrounded by armed sheriffs, talking about talking. What a waste of a congregation! What a waste of countless hours and hard fought funding, organizing, and traveling! We may not have a home, we may be beaten to a bloody pulp by a police state, but at least we will have demands!

The bright side of this situation is that the CHP was subjected to stand through one of the most miserably boring and useless General Assemblies ever. Really, if the state was thinking strategically, they would encourage us to stay there making masturbatory speeches, providing us with cots and food, until the movement completely implodes and we mic check ourselves to death! 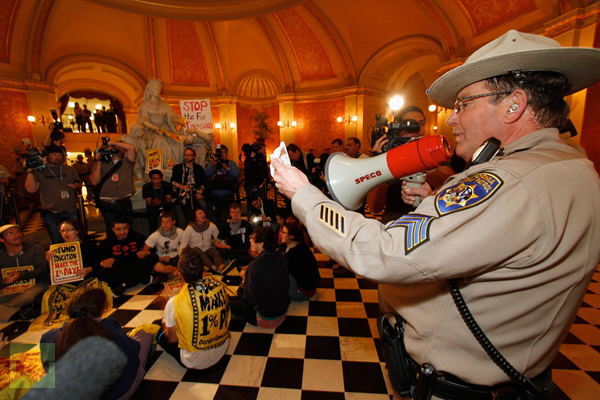 At 5 PM, the Demands are still not tallied. Repeated votes on whether or not we want to leave begin. it is clear that the facilitation team wants to leave. They continue to inform us of how scary jail is, and how long we may end up there if we get arrested. In reality, they do not want to go to jail themselves, and it will look really bad if they leave and the rest of us stay. The rotunda had quickly escalated to symbolize the asphyxiation of an attempted step in the student movement. Students trickled out of the Capitol, exhausted and frustrated at the hollow demands process.

I asked a demonstrator who requested to be mentioned only as “enonymous” what he came here to do today and how he thought it went. He said, “Fuck shit up. Which did not happen here today,” and then walked away with his head hanging.

Another activist asked me what I thought we should have done instead of demands. I replied that we could have done anything. Here was a brilliant moment: a day where angry and passionate students from across the state of California were together in one room (sort of). Another world could have been possible within those elaborately designed walls. We could have shared our collective experiences of the oppressive, institutionalized educational system and how we could free ourselves. We could have discussed a tactical plan for actually taking and keeping the Capitol, instead of once again getting arrested symbolically. We could have used the day to form relationships with one another, to bring back ideas to our campuses, to begin to build a new society out of the ashes of the old one. Why make demands to a dying monster? She agreed with me whole-heartedly and would have rather done that but had simply not understood what “zero demands” meant. For her, voting on demands was tedious and alienating, forcing her to frantically research each proposition before she voted on it. Sounds vaguely similar to a current system… right?

A General Assembly should not be utilized to formulate demands when you issue a call to Occupy. A general Assembly is a group of organized individuals who make collective decisions. to pre-suppose that demands are necessary immediately frames the conversation.

The debate of demands is a contentious one. It is not one to be glossed over. Occupy Wall Street was a success because it was radically different. It dared to question the hierarchical nature of society. It dared to be horizontal, to work based on consensus (and not vote), to be directly democratic and action oriented. It dared to be no more business as usual, punctuated by tents that sprung up everywhere. It dared to be anarchist, to demand nothing and to take what was needed.

Demands are inherently harmful to this movement. Demands invite reform and legitimize the state as an institution of power. We do not need the state.

Demands are a tactic. They are a specific strategy that can be utilized for revolutionary change. But they are definitely not the only strategy for revolution. Why should we move forward with demands? We need to critique the strategy of demands upon the state. To set an agenda with a vote on demands is top-down, and is a mimic of the system which already exists. We should have immediately questioned the authority of the self-proclaimed facilitators. We should have hard-blocked their agenda. Our first “demand” should have been for the sheriffs to release our comrades and unblock them from the rotunda.

There is a reason why, on #J28, the Oakland Police used brute force on activists and then kettled over 400 people. It was because the action threatened the fundamental power of the system: private property. If Occupy the Capitol had manifested itself as a reclamation of public space, the sheriffs would have utilized all the fancy weapons they brought that day. But Occupy the Capitol was not a threat. It was not an act of resistance. It was – at its best – an empty gesture.

We never reached consensus on the demands. We left with the perilous sense that the lobbyists upstairs were actually more effective than us that day. The pigs were bored and not threatened. Even the most staunch neo-con can wait out a day of ‘liberal’ protest.
If we are to change our world, if we are to win a better educational system, we need to dream, we need to dare, we need to shut the fuck up about demands and create, take, take over, and be free!