A Comedy of LAPD Errors 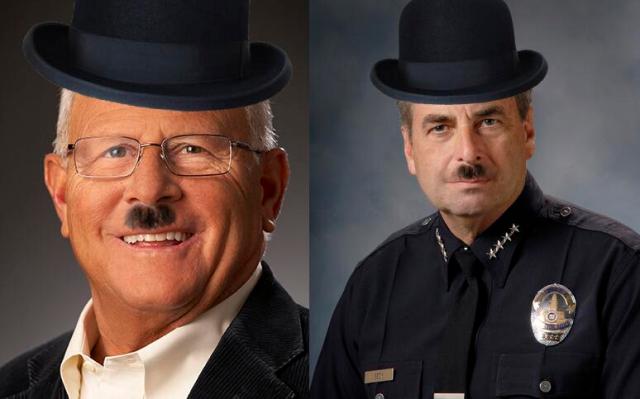 (ed. Thanks to @LAWSICK for the quick photoshoppery!)

Abbott & Costello. Burns & Allen. Martin & Lewis. The Smothers Brothers. Aykroyd & Belushi. Pryor & Wilder. And of course, Laurel & Hardy. When it comes to comedy, polyamory-proselytizers can shut the fuck up about how great open formations are because – at least when it comes to laughs – pairs have got that shit on lock. (Actually, to be fair, comedy troupes are the best of all. But I would say that because I’m for FULL COMMUNISM!)

As it were, however, famous comedy duos were flitting about in my head yesterday after I read Tami Abdollah’s AP report that LAPD Officers Violated Policy in Manhunt Shooting. I wondered: have a new comedic duo emerged in the pairing of Los Angeles Police Commission President Steve Soboroff & Police Chief Charlie Beck? And, if so, can we call them “LOL! & HarHar?”

Why am I asking? I can, will and have already. Popos truly are bozos!

See, while it took nearly a full year for the LAPD’s crack, Keystone Kopp investigative team to determine what everyone else knew from the jump – that pigs thinking all trucks are the same, mistaking two unarmed women delivering newspapers for a huge black dude and shooting 103 bullets at them surely deviated from department policy – that’s not even the funny part of the show yesterday. The funny part is how absurd ‘Friend of the IDF’ political appointee Soboroff and “Violence is never the answer” Beck are making themselves look as they fall over each other to justify wanton violence without offending (or implicating) the powerful lobby that is the Los Angeles Police Protective League or its dues-paying members.

And yes, while it’s kinda funny to me to hear a Chief of Police who – almost 1 year ago – gleefully celebrated burning alive an “innocent man” (in this country, you have to be convicted by a jury to be “guilty,” no?) describe Chris Dorner as “a man who had no soul,” before I get into dissecting Abdollah’s AP article, let’s laugh together while watching “LOL! & HarHar” as they show us what having “soul” looks like:

But enough “nyuk nyuks.” Let’s get serious, folks. After all, that’s what the internet is for! In the aforementioned article, Beck seriously said:

Let’s all remember how quick the police are to invoke “a tragic cascade of circumstances” when any of their own face consequences for their actions. I promise you’ll never hear Beck say a similar thing about someone who, under the grating wheel of poverty, white supremacy and other immiseration, steals something or robs someone. “Tragic cascade of circumstances,” indeed. But Beck has more jokes:

In the early morning hours, officers said they saw the blue Toyota pickup “creeping” down the road, according to the chief’s report, with its high beams and flashers on.

What kind of fucking person describes a car making its presence known about as brazenly as possible, flashing lights and being ostentatiously bright, as “creeping?” How can anyone supposedly trained in investigation say this with a straight face? Or expect us not to laugh riotously? More hilarity:

“While there were similarities, the truck that approached was a different make and model, different color, had no ski racks and no over-sized tires.”

Basically, what the LAPD wants us to believe is that ALL TRUCKS ARE BASTARDS! Or at least when they’re trembling in overhyped fear…

But it gets worse. Oh boy, does it:

Beck said officers opened fire immediately after one woman threw a newspaper and an officer mistook the sound of it hitting the pavement for gunfire.

Think about that for a minute. Go back to the 1990s if you have to, grab an actual newspaper, and throw it on the sidewalk. Throw it hard. Try to make some fucking ruckus! Cut loose with that corporate rag! Do with that newspaper what no newspaper delivery person casually tossing a paper onto a driveway would ever do – spike the fucking thing against the pavement as hard as you possibly can!

Now go to a gun range, a place where presumedly-trained LAPD officers spend some time practicing with firearms, and shoot a gun. Or just listen for a bit. Without ear protection. Sound similar? Vaguely? Remotely? Even in the same aural fucking spectrum of sounds? Who the fuck could possibly say this and not laugh? Who? LOL! & HarHar, that’s who!

Then again, police fired 103 shots and 40 – 40! – of them hit houses and nearby structures. More than 1/3 shots couldn’t even hit the broad side of a fucking truck! So it seems the LAPD really don’t spend much time at the range at all, after all, do they?

Not to be outdone, however, strip mall magnate and neocolonizer-in-chief Steve Soboroff just couldn’t stay out of the hilarity. Here’s Soboroff’s contribution to inanity:

Soboroff said in a statement. “As in all use of force incidents, the department has completed a thorough review and will adopt the lessons learned, both good and bad from these incidents.”

G’ahead. Reread that gem! The department that this fucking shining genius oversees will “adopt the lessons” that are “both good and bad.” Adopt the lessons. Good and bad. Wait? Adopt the bad lessons? Did he say that? What the fuck? What does that mean, smarty-pants? Don’t you all waste millions on PR? What PR flak wrote that word salad of idiocy? A person not thinking on a comedic level might think that meant you’d shoot more innocent people with even worse aim over even more specious reasons than a newspaper sounding like fucking gunfire!!!

We need to take all the guns away from the LAPD right now. Seriously. We need an immediate, civilian review of their “policies.” Of their training. Look at what trained officers do, just in this one case alone!

Comedians like LOL! and HarHar clearly cannot be trusted with public safety or its oversight. It’s time Soboroff and Beck go back to the sparsely-populated, sad, soul-crushing open-mic circuit of failed Angeleno hopes and dreams where they both belong! 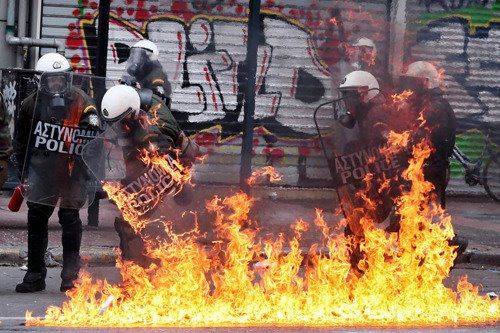 It didn’t take long, but Har!Har! has determined the totally-unsurprising dearth of consequences his underlings will face for attempting to murder two unarmed women:

‘‘I have confidence in their abilities as LAPD officers to continue to do their jobs in the same capacity they had been assigned,’’ Beck said in a department message to officers obtained Wednesday night by The Associated Press. ‘‘In the end, we as an organization can learn from this incident and from the individuals involved.’’

We really can’t afford to laugh this bullshit off anymore! See you at the barricades!

Please consider donating to our writer’s relief fund here! Thanks for your support!

6 Responses to A Comedy of LAPD Errors