The SEIU: ignoring over a century of labor history to fawn over “beloved law enforcement heroes”…

[ed. Reports from the streets of Chicago’s May Day march revealed, once again, that the “labor movement” many comrades wax so nostalgic about has betrayed fundamental, historical facts of our movement. While we have long known the SEIU and other liberal power brokers are untrustworthy allies in struggle – and have even had to eject violent, SEIU organizers from our spaces – the fact that unions have historically joined the state “[in] an alliance to crush radical labor groups” can never be forgotten. The following is a brief ‘report back’ from a comrade who was in the streets of Chicago on May Day, 2014.]

“No Borders! No Nations Fuck Deportations!” To start the day Wobblies, Anarchists, Marxists, Anti-capitalists and anti-authoritarians gathered at Union Park. They discussed the radical history of May Day in Chicago, Emma Goldman, Trans-rights, the War on Drugs. The red and black flags, long symbol of Anarchism , were flying high as we gathered and ate free meals provided by Food Not Bombs Pilsen. A long row of pig cars gathered (predictably) to watch us. 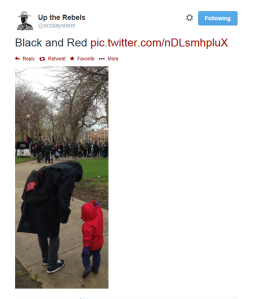 “Show me the working class!”

Hilariously, they put on their flack jackets but scattered when a light right started. As Proposition Joe once said: “Police don’t get wet.” While the Black and Red Bloc gathered and then snaked it ways through the streets on our way to the Haymarket Memorial. The Haymarket Memorial, a memorial to remember the Haymarket Affair an infamous bombing of the Chicago Police Department. Only one police officer died by the bombing and more died at the barrel of police shooting blindly at each other. The enemies of the working-class fired on the crowd and killed four laborers. So we go into the streets in this tradition: against the police, against Capitalism and in solidarity with the working-class.

Immediately our march was stopped for “not having a permit”. Whatever. Fuck off Pigs. We go where we want. We do what we want. We arrive to Haymarket and a comrade asks for the start time of the march. We hang one of a banner  at the Haymarket designed by an PoC anarchist comrade from immigrant parents. Hannah Arendt once wrote:

“Of all the specific liberties which may come into our minds when we hear the word ‘freedom’, freedom of movement is historically the oldest and also the most elementary. Being able to depart for where we will is the prototypical gesture of being free, as limitation of freedom of movement has from time immemorial been the precondition for enslavement.”

This is how to analyze systems of power and domination. None are free until all are free. From borders, from prisons, from the bosses, from the government.

And so the Red and Black contingency marched toward ICE with various leftists groups, NGOs, and others. While the three letter socialist organizations were busy handing out pieces of paper (“Dude nobody wants that fucking shit!”) the anarchists danced and chanted about smashing prisons. “Brick by Brick! Wall by Wall! The Prison System has to fall!” Almost immediately, the march organizers protesters fought with the Red/Black Bloc about who should position where. This is a yearly tradition. On the ground, we had a comrade with a banner denouncing ICIRR’s reformist policies. For example, they are asking the President to stop deporting people until after there is an immigration reform bill passed. This reform bill is primarily about enforcement of the border not eradicating them. It puts more police on the border but doesn’t reduce their capacities for warrantless searches or random searches by the police. So yea, different ideologies, different tactics but similar goals.

And so we are about three rows behind the front of the march. So Comrades is moving up with the banner denouncing ICIRR and they get immediately swarmed by ICIRR “march marshals” as well as SEIU marshals (wanna-be cops). As soon as this happens, the comrades argue with ICIRR and SEIU and try to move on. They make their move back into the crowd and are immediately snatched by CPD thugs.

Immediately the Black/Red Bloc moved to confront the armed violent thugs of the Chicago Police while everyone else yells at us to “move along” and keep the march together”. We don’t roll like that. A few of us get hit by pigs and we try like hell to get to our comrades. Everyone is yelling their favorite ACAB chants. “From Chicago to Greece, FUCK THE POLICE” We record the whole interaction and the police try to detain our comrade for filming them. Cops hit another person from behind. These particular arrests pisses everybody off since one of the arrested comrades is an undocumented person who is fighting deportation proceedings. Yes you read that right, the ICIRR targeted an undocumented anarchist for arrest because they didn’t like their sign. Even worse, they turned over that person to the police. Nice solidarity.

For what it’s worth, the ICIRR categorically denied this on May Day . Videos of that day show that this is not true. Even one of the comrades arrested spoke publicly (en español) against the racist system of power that ICIRR was promoting.

They spoke against the racist enforcement of the political bill that ICIRR was promoting and against ICIRR and SEIU themselves. Ze (one of the arrested comrades) was passing out these zines to connect the dots between racism, the war on drugs, and immigration. And so this is the position we find ourselves in. “Liberal” reformist NGOs like ICIRR push reformist bullshit while putting people they disagree with in the same system they claim to be against. What a nice way to spend your May Day.

Solidarity Forever (and not as some god damn platitude)!

[ed. For more details on yet another betrayal by these collaborators, click here.]

The Labor Aristocracy is not your friend…