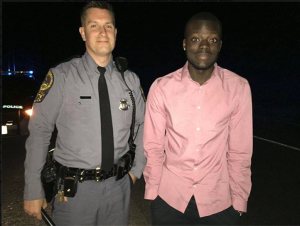 White Cop Does Not Kill Black Motorist, Becomes National Hero ( Or: Why America Should Not Be Saved)

In 2015’s United States of America, a white police officer that does NOT shoot and kill a black motorist is considered a hero. In recent mainstream media (MSM) reports a white police officer named Matt Okes is being praised as a “hero” for not brutalizing or killing a young black male, Joseph Owusu, who was pulled over to the side of a road due to a flat tire.

Joseph, a Virginia Tech University student and son of Doctor Nada Owusu, has become famous overnight for not becoming the next victim of police murder.

The sheer fact that this story has been shared nearly a million times on social media and has been picked up by MSM tells another story altogether. One in which dark people; young…

This entry was posted in Uncategorized. Bookmark the permalink.