It seems there are two kinds of journalists in the world today: those who pal around with fascists to hear their story – to find out what makes them tick and share supposed fascist “fragility” in their own, self-centering and glamorous profile pieces  – and those who seize the opportunity to take a photograph of an email signup sheet left unattended in a public building at a public event. Happily, I’ve found friends among the latter. The former can fuck off back to Oxford – or back to shared champagne in greenrooms with fascists.

Contrary to Berkeley College Republicans’ incendiary (and false) claims that, “a man on a bike road by Sproul Plaza and snatched their email list,” the provenance of this list is exactly as described above. An intrepid journalist with free and unencumbered access to a public building saw this list unattended on a table filled with promotional materials and sagely snapped a photograph. Which they then sent to me. To publish. While adding, almost desperately, “Please do this. The CRs are turning into a fascist front group really, really fast.”

Complaints by Berkeley College Republicans that publishing this list will invite “targeted harassment” ring more than a little hollow when the event they sponsored featured a fascist who actually has made his name in targeted harassment; Milo Yiannopoulos. That harassment continued on his current college tour at the University of Wisconsin-Milwaukee, where Yiannopoulos himself targeted a student for harassment. It has also been suggested that Yiannopoulos planned to out undocumented students at Cal, a claim supported by a campaign he himself planned to inaugurate there against “sanctuary campuses.” When your currency is targeted harassment, you should expect a refund in full and in kind from those who don’t buy your bullshit. All of this, of course, serves only to justify the militant resistance seen at Berkeley by students concerned about their own classmates’ safety and the bold actions of my source to out those who actually support targeted harassment.

But this isn’t about maintaining some lofty, liberal high ground – this is about fighting fascist fire with revolutionary steam. So without further ado, here is the list itself as it was conveyed to me:

I saw the list and was immediately concerned; what if some people had planned to disrupt this event? But I also wondered, why then – would they signup on the BCR’s mailing list? So I sent a query letter, as any ethical journalist might, to gauge their thoughts on both the BCR’s lack of operational security and their feelings on Yiannopoulos and give them a chance to speak for themselves. I’m nothing if not fair. So I wrote them all a letter giving them ample time to respond and defend their own voluntary inclusion on that list: 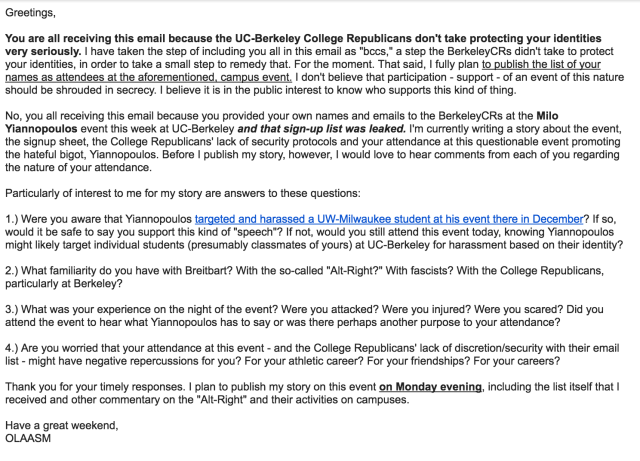 Several students responded to the letter immediately. The list includes a Cal baseball player and a Cal football player. They chose not to respond. However, the BCR’s did respond, making extraordinary (and false) claims of a brazen theft of their list on local media and to a rightwing “Campus Reform” website. The calls for my head came in loud and clear, as did the calls for outing me, which has already been done. I’m not afraid; my name is Craig Toennies and I’m against fascism.

Hi,
This mail was sent to me by mistake. I am not aware of being on any list. I did not attend the event. I do not condone or support Milo and his views, and I voted for Hillary Clinton in this last election.
Thanks.

Greetings,
I gave them my email via their website to hear about their upcoming events in order to have stimulating conversations that confront my own biases (given I consider myself a “liberal”). I did not have tickets to the Milo event nor did I attend the protests, so I don’t know why I am included in this list. I also believe satire/ridicule is the best remedy to such hateful speech, rather than covering one’s ears and demanding dissenting opinions be silenced. Unfortunately this is not the way in which the world works, you cannot simply hide from voices you do not wish to hear, you must confront them in order to extinguish them. If hate speech is a disease, open criticism is its treatment, and censorship merely acts as an aggravate.

But to the greater point, you really think anyone who was interested in the event was therefore a supporter of Mr Yiannopoulos? I find that patently absurd. I believe most rational people could see that an email list from the College Republicans does not imply that those on the list are: 1.) republican to begin with and 2.) even if they were republican that they necessarily agree or support the views of Milo. Of course, given I find myself on this list, one must realize that it in fact does not contain those who were attending the event, just those who had provided their email to the College Republicans.

I also would point out the hypocrisy in criticizing the non-consentual release of a person’s identity, yet in response turning around and doing the exact same thing.

Why would they need to protect my identity in the first place anyway? I can’t join political clubs at the university I attend? I really don’t care that people know I’m on the email list for a political club on my campus, especially given the fact that I myself am not a republican and did not have admission to the Milo event.

You’re really just making our side look more and more pathetic by doing this. I keep leaning farther and farther right as I cringe at the encroachment of liberties perpetrated by the party that once stood strongest for them.

Release my name anyway I really could care less- if it makes it so I can have engaging discussions with people that I disagree with then that’s something that should be appreciated, not feared.

Unfortunately for Cummings, his actual signature appeared on the list and he checked in at the event himself on Facebook. This seemed to contradict his claims of giving his “email via their website” and that he “did not attend.”

I pressed Cummings on this point, and he continued:

Okay while writing this i just finished reading the article on his mocking of a trans student at UWM and that reallyyyyyyy pisses me off. Did he just straight up reveal their identity to the whole crowd? Did that student undergo any violence afterward? If that’s the case and that’s what he was planning on doing at UCB then i actually would not agree that he should have a platform to speak because that’s an incitement of violence. (I swear i’m not just saying this to appease you). I was told he was giving a talk on cultural appropriation and the conservative perspective on it, something that should I think in fact be allowed.

Yes, Mason. That’s pretty much what he did. And very likely what he planned to do at Cal.

Noah Jacobs, protested his inclusion and insisted he attended because liberal Professor Robert Reich suggested it:

To be honest, I went to a talk by Robert Reich about public discourse and political engagement. He urged us liberals to reach out across the aisle and bridge gaps and engage in constructive dialogue. I thought that by seeing what the College Republicans were up to (particularly what they organize week to week after that Milo stunt), would help provide more clarity and insight.
I by no means align myself with that group, but cutting myself off from people who think that way and resorting to my social media echo chamber would cut off information about the other side, and the roughly 66 million people who did vote for Trump.
Best,
Noah

Fair enough.
The rest of the list remained silent, which is their right – whether you’re a Cal baseball player like Trevin Haseltine or a Cal football player like Ryan Gibson. They’ll have to defend why they signed up to hear more from a campus group actively promoting the harassment of their classmates to their own teammates and classmates. And to you. But my work here  – for now – is done.
Again, I’m Craig Toennies and I’m against fascism. I’m down with punching actual fucking Nazis and I’m down with shutting down events that feature fascists. You can put me on that fucking list. I’m pretty sure I already am. 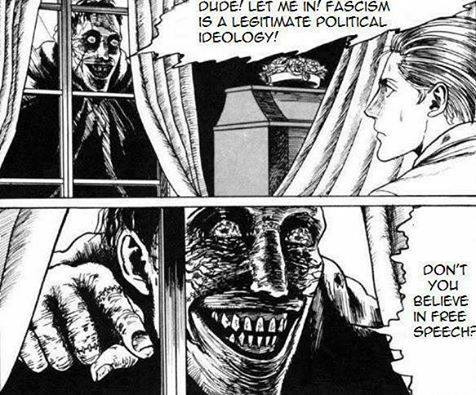